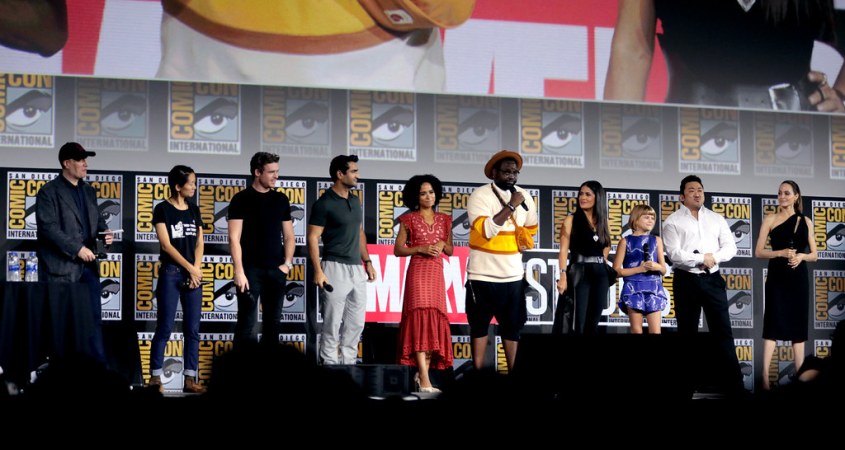 When you think of a film with ten leads, two timelines, a 7,000-year time span, and a 2 hour and 37-minute runtime, you generally don’t think of a five-star film. Eternals could not have been handled more gracefully by anyone other than Chloé Zhao, who recently won Best Director for Nomadland at the 2021 Oscars. Eternals, as a singular film, chronicles the entire history of the group of immortals, from when they arrived on Earth in the time of Mesopotamia to today, something that has taken Marvel comics over ten comic book runs (so far) to accomplish.

Speaking of comic books, Eternals deviates far from its source material (if you haven’t seen the film yet, stop reading here – spoilers ahead!). In the comics, the Eternals have their name for a reason – when they die, they’re resurrected, so they are never truly gone. In the movie, when they die, they die, which makes sense from a practical standpoint, since the actors will age (whereas art never will), so the Marvel Cinematic Universe can’t keep reviving their characters for longer than a century or so, but removes so much of their appeal. Salma Hayek’s character, Ajak, is also killed in the first act of the film, which is heavily disappointing once the viewer finds out she isn’t coming back. This, too, raises the question of how none of the ten died in a 7,000 year time period, yet three die in a week. There’s also the large change of Richard Madden’s Ikaris turning against the rest of the Eternals – in the comics, Ikaris is the vision of a hero, and even serves as the Prime Eternal for a short amount of time. He is often considered the leader of the Eternals and would never dream of turning against them. While fans of the character may have been dissatisfied with the path he took, the twist certainly surprised even the most devoted comic book fans.

One major change was certainly for the better – Eternals is significantly more diverse than its comic counterpart and any other movie the MCU has produced. Six of ten of the leads are people of color, and half are women. Brian Tyree Henry’s Phastos is the first LGBTQ+ hero in the MCU, and Ajak, Lia McHugh’s Sprite, and Lauren Ridloff’s Makkari are all genderbent – in the comics, their characters were men. Makkari has another major change: in the movie, she is deaf and communicates only through sign language. Ridloff herself is deaf, and she plays the first deaf character in the MCU. Makkari’s power is super speed, so her deafness makes sense, and is actually a part of her powers – her speed creates sonic booms, which don’t affect her since she cannot hear them. This is one of several intentional small details scattered throughout the film by Zhao that contribute to Eternals’ significance in the Marvel universe. The film is extremely different from anything Marvel has done before. It is filled with meticulous and careful design like Barry Keoghan’s Druig and Angelina Jolie’s Thena viewing the painting “The Monk by the Sea,” which was placed intentionally as foreshadowing.

Even with its star-studded cast, beautiful storytelling, and breathtaking cinematography (Zhao insisted on shooting on location as much as possible, which made the film that much more real and aesthetically pleasing), Eternals still was too much of a challenge to be handled perfectly. The juggling of ten leads was overwhelming, especially for the casual viewer. The uniqueness of the characters’ names didn’t help, either – if you didn’t have any familiarity with the comics, keeping track of the leads was not an easy task. Kro, the secondary villain, was also incredibly underwhelming, He had maybe five minutes of screentime and did not hold any significance in the final conflict of the film – he could have been cut from the film and it would have been almost entirely the same with more time to spend on the leads. Overall, the cast and Zhao held Eternals together and made it special – Madden’s first venture into the superhero genre showed just how right he is for it (if Ikaris never makes another appearance, I personally might riot), Jolie’s veteran status shone and her portrayal of a wounded warrior was absolutely heartbreaking and incredibly real, and Gemma Chan’s Sersi served as a wonderful connection between these gods and us humans. Kumail Nanjiani’s comic relief was some of the best I’ve seen from him (and I’m a huge fan) especially when he was with Mchugh, who, at only 16 years of age, took on her role as a centuries-old being with ease. Keoghan and Ridloff were surprising standouts who had palpable amounts of chemistry, even when they weren’t touching foreheads. I was very happy to see Ma Dong-seok venture into American cinema as the lovable Gilgamesh, and I hope his performance encourages more Americans to watch Korean films. Hayek, even in her limited screentime, recreated Ajak as a sensible and caring matriarch and showed why she is such an iconic figure in American pop culture, and Tyree Henry shone as Marvel’s first gay hero with a beautifully emotional and touching execution of Phastos. Kit Harington and Harish Patel as Dane and Karun are worth mentioning as well – their human perspectives helped ground the film and the most laughs surely came due to Patel’s genius comedic timing.
Eternals, in its poor ratings and its characters’ obscurity, still cements itself as a turning point for the MCU and a lovely film in its own right. Its diversity and Zhao’s attention to detail set important precedents not just for the MCU, but for Hollywood as a whole. I give Eternals four stars.