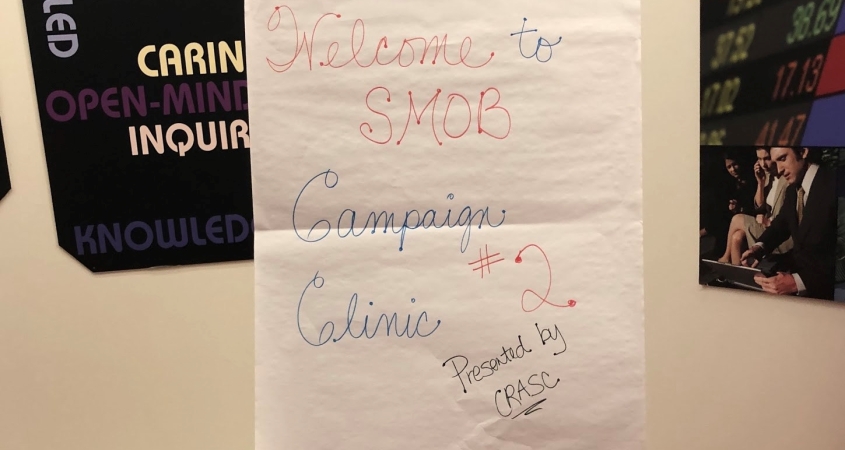 Chesapeake Regional Association of Student Councils (CRASC) held their final clinic for Student Member of the Board (SMOB) elections on Wednesday, February 27th at Old Mill High School. It was a split meeting, with a mock panel for the SMOB nominees the first half of the meeting and the regular agenda the second half.

Anthony Liberatori, CRASC President, began the meeting by reminding SMOB nominees of important dates for the election process before explaining how the mock panel would work.

There were four nominees at the meeting and about twenty attendees total. Other members of CRASC who were not running for SMOB were given an index card with a colored sticker on the back and assigned to one of the SMOB nominees by counting off. Once everyone had a number, attendees got into their groups and worked with their SMOB candidate to develop a mock platform. Each group had 15 minutes to organize a platform and prepare a one minute speech.

After time was up, each nominee was called to the front of the room one at a time to present their speech. Liberatori timed the nominees to give them a feel for how it would be at the actual debate.

Most of the nominees were cut off by the timer during their speech, but CRASC officers reminded them that it was just for practice and they would have more time the day of the actual debate.

After each nominee had given their speech, there was a question period. The index cards that had been passed out earlier were used to assign attendees to another group. Red stickers represented parents, blue were employees, green were students, and yellow were community members. Attendees were supposed to compose a general question for all of the nominees to answer from the point of view of their character.

The four nominees sat at desks at the front of the room and Savannah Quick, CRASC Secretary of Education, acted as the moderator. Question topics included equity, racial tensions, equal opportunity, and power awareness.

Each nominee had one minute to answer the question or pass, with an opportunity for rebuttal after each question.

As more questions were asked, nominees improved with answering in their allotted amount of time without getting cut off and learned that it was okay to not answer a question or be unsure of what to say because the exercise was just for practice.

After all the questions were asked and answered, CRASC officers offered feedback. Most of the positive feedback was in relation to speaking clearly, having good body language, and being confident, but aspects that needed improvement were more diverse. Some tips offered were to know the facts, be relevant to all schools, be mindful of personal bias, have a piece of paper to jot down notes, do not say “I agree” or “I disagree” because it wastes time and will not make you stand out as a candidate, be careful to not sound like you are arguing when rebutting statements, and talk about something related or explain what you would do to find information if you do not have an answer to a question instead of just passing.

Liberatori, Josie Urrea, current SMOB, and Coleman Campbell, CRASC Vice President, have said several times at previous meetings that it is very important for nominees to know what they are talking about because it is very obvious during the interviews and the debate when nominees do not know the facts. Urrea reiterated this point when she stated, “I would definitely do a lot more research,” by studying the budget, reading the AACPS handbook, and going to board of education meetings.

Nominees were reminded once more that the deadline for nominations was March 1st, applications are due March 7th, and interviews are coming up on March 18th before moving on to the regular agenda.

Things that were mentioned included the Curriculum Academy Kickoff, which is for teachers to rewrite old curriculum or implement AVID and ESOL into the curriculum, the Maryland Association of Student Councils (MASC) convention in Ocean City Maryland that had been mentioned at previous meetings, the STAR Program (Screening Teens for Access for Recovery), which is being implemented in schools to help students with substance abuse, and the leadership planning event at George Fox Middle School on March 21st.

A more highly contested topic was the new CRASC t-shirt design. Stacy Pellegrin, CRASC Advisor, showed members a mockup of a red t-shirt with the outline of the state of Maryland and “Chesapeake Regional Association of Student Councils” written out with the acronym “CRASC” on it. Feedback on the design was immediate as members called out suggestions, but they were able to concur on what changes to make before moving on to the Round Table Officer Reports.

Rida Alvi, Secretary of Legislation, explained that she was unable to testify on behalf of CRASC for legislation on tobacco, Campbell discussed a teen advisory school safety talk he attended, Urrea informed attendees of a Teacher’s Association of Anne Arundel County (TAAAC) march and another walk being held in Montgomery County, and Liberatori reminded SMOB nominees to turn in their nominations and applications by their deadlines.