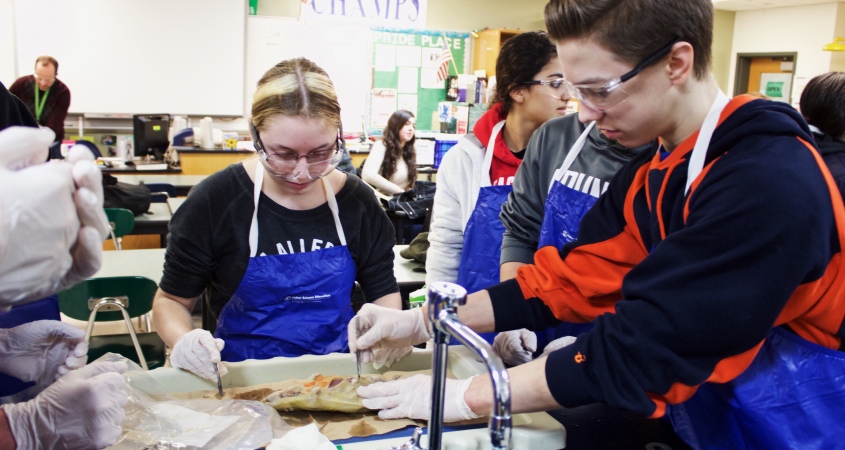 On Thursday, January 17th, Arundel’s Science Honor Society members along with students interested in anatomy participated in the long-awaited dissection of a fetal pig and a pregnant rat, held by biology teacher Mr. Swetz.

Before any incisions were made, Swetz enforced safety rules and regulations. “Whenever you’re dissecting, it’s really important to have your goggles on and be safe,” said Swetz. He also reminded students of the proper way to use the provided tools and to “hold blades away from you–be very safe.” 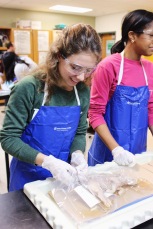 The students split up into two groups, one of which would work with discovering different organs and tissues within the pig, and the other would focus on finding the uterus of the pregnant rat. Student Mela Nebiyeloul conveyed the building anticipation, saying “I’m so excited!”

Before starting the dissection, goggles were lowered over eyes, the animals were rinsed off in the sink, and a sanitary surface was placed over two lab tables.

The pig was laid on its back, and Science Honor Society member and Dissection Club officer Tay Cheema cut down the center of the it’s stomach while Science Honor Society member Jillian Lopez held the pig steady on the table. They then made incisions with scissors to find the pig’s large and small intestines. Multiple other discoveries were made within the pig, including the students uncovering clear connective tissue that links skin to muscle, the heart and lungs, the liver, the pancreas, the umbilical cord, the arteries, and the veins, each of which was explained by Swetz. The students were also instructed how to tell the gender of the pig.  “It’s not what I expected,” said Lopez of her experience. “It’s really cool and a lot heavier than I thought.” 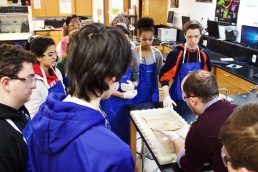 Overall, the highly-anticipated dissection was a success. The participants walked away with an experience not common among the average high school student having discovered for themselves the anatomy of the pig and rat, as well as gaining the feeling of achievement found in finding exactly what they were looking for within these animals.