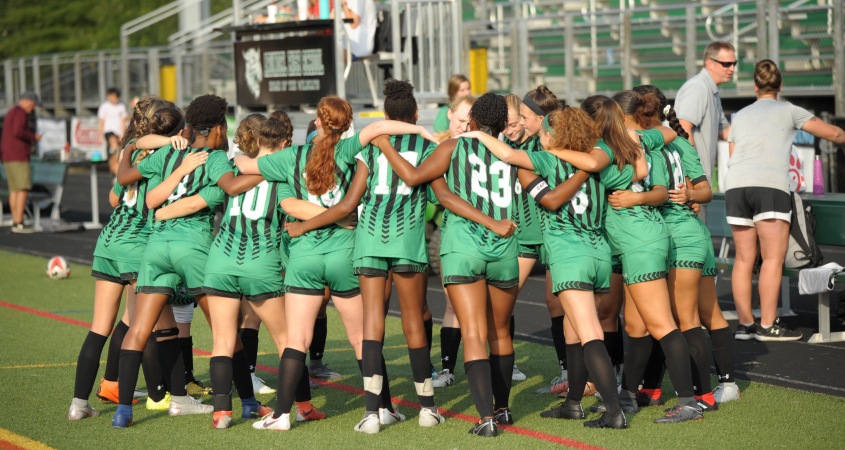 Coming off of a three-game winning streak and a first-round playoff win vs. the North County Knights , the Arundel Women’s Soccer team was looking to keep their playoff run alive against the Old Mill Patriots in the Regional Quarterfinal matchup.

These two teams faced each other last on Tuesday, October 2nd, resulting in a 3-0 Old Mill victory.  Since the loss, Arundel would go on to finish the season with a 5-3 record, including back to back wins against North County and Southern to complete their regular season.

“Throughout the season we’ve been able to improve our passing and how we play as one unit.  Going into the game we were all pumped up since we lost to them in regular season, we all wanted this game really bad,” said Senior Captain Colleen Murphy.

Everything was on the line; the winner moves on to the Regional Semi-Finals game while the losers season comes to an end.

The game started quickly, Old Mill went for the goal from the kickoff, posting two shots on goal within the first 5 minutes.  Arundel struggled early with possession and had minimum opportunities to score, but that all changed in the 20th minute when Katie Reed put a pass through the defense to Samaya Togba who would go on to score the first and only goal of the game.

“My goal affected the team because it gave us a more positive and winning mindset, the pace of the rest of the game was filled with so much intensity,” said Sophmore Captain Samaya Togba.

The rest of the game was back and forth among both teams, team posting shots on goal and playing good defense.  The Wildcats were able to stay behind Samaya’s goal. Goalkeeper Sammy King let up no goals the entire night, and the defense made key stops.

With another win under their belt, the Arundel Women’s Soccer team will go on to face the 2018 County Champions, the Severna Park Falcons in the Regional Semi-Final matchup on Thursday, November 1st.