On Saturday, October 27th, from 2 p.m. to 9 p.m., Arundel hosted the 14th annual USBands Wildcat Spectacular at Carroll Field. Twenty Four schools – the majority from Maryland and a few from Virginia – participated to earn seating at the Mid Atlantic Championship and Nationals.

Arundel’s performance ended the competition altogether, with a mix of short choreography, beat boxing, solos, rhythmic movement, and flag twirling. At the beginning, Caleb Chang and Jacob Wright had brief solo’s leading into the rest of the ensemble and color guard to join in. Then, they switched from an upbeat jazz song, Lollapalooza by John Adams, to a formatic grand opening. Next, a flute solo cautiously brought in a well known song found in the background of movies and TV shows from E. Grieg called “In the Hall of the Mountain King.” After a short pause, they shed a softer tone to Leonard Cohen’s “Hallelujah.” Setting their instruments aside, the ensemble showed off their intuned choreography while the color guard performed their own routine until they come back together closing the night with C. Saint-Saens’ “Bacchanale.” Overall, Arundel’s Marching Band displayed how many hours of dedication and hardwork perfected their show, “Junkestra.”

For seniors–it being one of their last shows–the sentimental value as a whole shined throughout. Nayab Khan said, “it’s a great honor, I’ve made life long friends, been on adventures,” and, “I wouldn’t want to have my senior year any other way.” 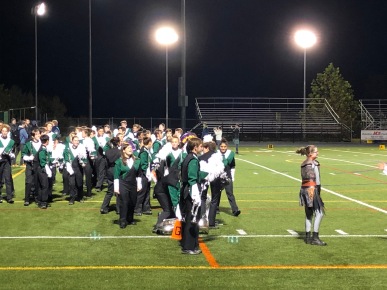