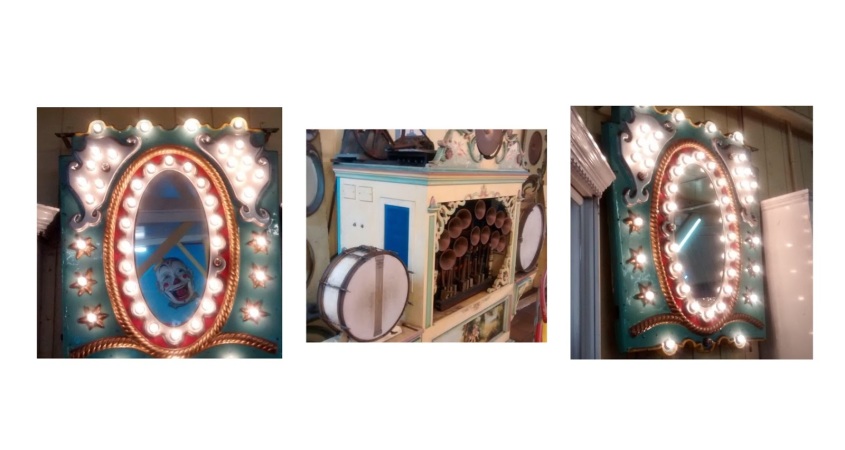 Many have gone to the historic carousel at Trimper’s Rides in Ocean City, Maryland, and many have probably read about its history there or rode it, but is there something else historical too?

A 25 year old home-built band organ made by Bill Kromer was discovered near a vehicle flat ride, sitting and not operating, with parts from what appears to belong to the organ, or from another organ that was previously there. It has not been playing, and is probably in need of a restoration. A band organ (an American fairground organ) is a loud automatic organ used mostly for carousels, fairgrounds, and circuses. They were designed to mimic fairground organs, which is the name of band organs outside of America.

The organ looks like a Wurlitzer Style 125 Military Band Organ, but it wasn’t until another trademark was discovered that this was disproved. Bill Kromer, who passed away in 2017, always labeled his organs with a flower trademark. He made very few of them. This one was discovered in Ocean City, Maryland by a Mechanical Music Enthusiast, and a few others might have heard about this organ or discovered it too.

Acts of vandalism have been reported on the organ too. Reports of someone using one of the horns to hit on the drums was mentioned. Even the plug is busted on it. It’s in need of restoration due to this desecration.

The organ is not in operation, and it was confirmed that the organ hasn’t played since 1999. When any automatic organ is not played for a long time, it usually rots, plays much slower, or stops working completely. If the original Artizan C-2 is scrapped, Trimper’s Rides in Ocean City, Maryland, should be aware of this piece of history, and at least repair the Bill Kromer band organ to make it play again.