On Friday, October 5th, the annual Homecoming Pep Rally was held at Carroll Field from 1:20 p.m. to 2:18 p.m. There were several events including a performance from the Marching Band and Color Guard, the Dance Company, the Cheer Squad, the Prancing Wildcats, the Clash of the Classes competition, announcement of Spirit Week winners, and presentation of the Homecoming Court.

After about thirty years of being the Pep Rally MC, Ms. Towns passed the baton on to Ms. Plitt, who said she has big shoes to fill. However, Ms. Plitt said that Ms. Towns was, “very supportive, very helpful,” and that she will probably do it again next year because she enjoyed, “getting to see all the school spirit.”

Arundel was on a modified schedule to allot time within the regular school day for the Pep Rally. Students were released from fourth period and dismissed to the football field at 1:05 p.m. and required to sit by graduating class. All students were told to take personal belongings with them to the field because they would be dismissed directly from the field. Any seniors with partial schedules returning for the Pep Rally were told to park in a numbered spot in either G Hall or the middle school, and to arrive at 1:10 p.m.

The festivities officially started with a welcome from Ms. Plitt, the new Pep Rally MC. She warmed up the crowd with the Class Shout, a competition between the graduating classes to shout their graduation year louder than the other classes. Some classes had more enthusiasm than others, and the freshmen class had some difficulty coherently shouting the year 2022.

Next, the Marching Band played the Arundel Fight Song and the cheerleaders did a few small scale stunts on the track in front of the bleachers.

Then, the fall sports teams were presented. Each team sat together in groups on the field, with each team at a different yard line, and were permitted to do a cheer after being announced. First was Golf, then Cross Country, Field Hockey, Women’s Soccer, Football, Men’s Soccer, Volleyball, Unified Tennis, and Cheer. After every team was announced, all the fall sports moved to the in-zone to make room for the other events. 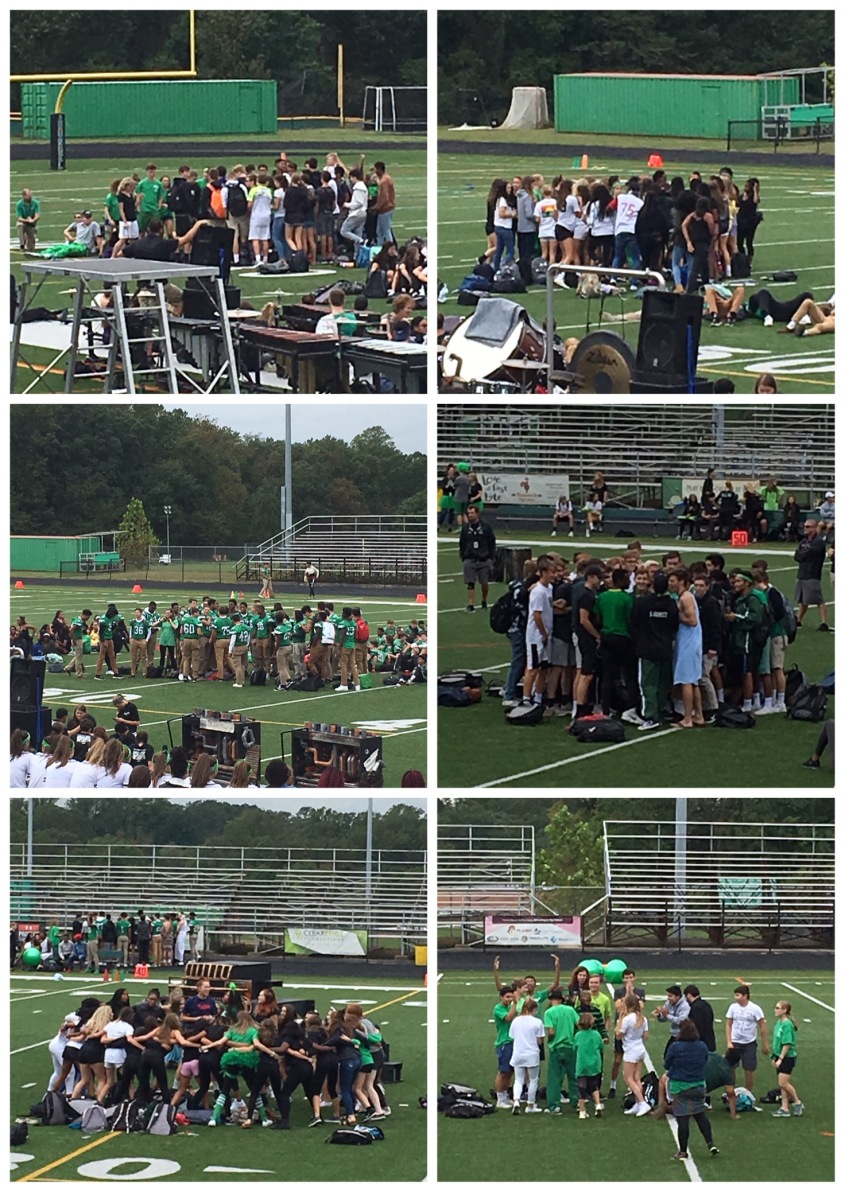 The band and Color Guard performed their normal half-time sequence, following the presentation of fall sports.

After the band, the Dance Company performed to a mash-up of several pop songs and were followed by the Cheer Team’s full performance on the field. 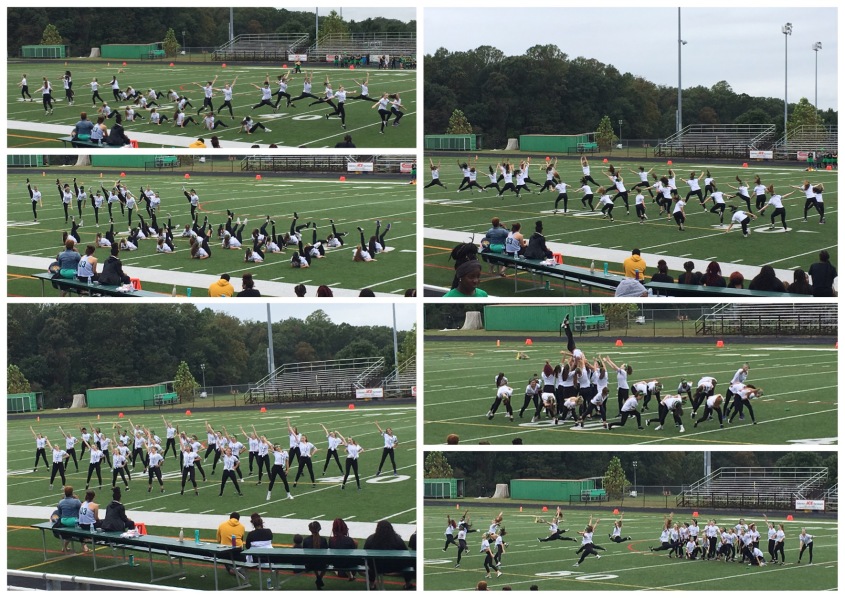 Next, was the Clash of the Classes, a type of relay race with five parts. Each graduating class had a team with nine members. The winning team of the graduating classes would then get to race the teacher’s team. There were five obstacles, starting with the dizzy stick, then the bag race, human wheel, three legged race, and finally the bouncy balls. There was one member from each team on the dizzy stick, one on the bag race, four on the human wheel, two on the three legged race, and one on the bouncy balls. The senior class won against the other classes and got to compete against the teachers. It appeared they would have beat the teachers too, if they had not been tackled by the teachers during the last leg of the race.

New this year, was the Prancing Wildcats. They are a new dance team (separate from the Dance Company) organized by Ms. Mordecai. Students were very impressed by the new dance group and cheered the team on throughout their performance.

That was the last performance before the Spirit Week winners and Homecoming Court was announced. There was a winner for each day of spirit week, with four Thursday. ‘Merica Monday was Hannah Maher, Tropical Tuesday was Jalen Curtis Robinson, Character/Meme Wednesday was Tia Lysse, Throwback Thursday was Alex Christhif, Madi Brown, Ally Walton, and Jayden Suter, and Class Colors Friday was Brianna LeBarron. The Homecoming Court was presented by class, with Ethan Haynie and Ava Mosby for Freshmen, Kyle Catania, Leo Winter, Kevin Mezzaache, Brooke Barber, Shayla Clarke, and Oriana Crowley for Sophomores, Joshua Chang, Devin Miree, Tenlee Heflin, and Christal Smith for Juniors, and Spencer Keys, Gereme Spraggins, Chris Jones, Jeniaya Amos, Allie Mitchell, and Paige Anderson for seniors. The winners would be announced at the Homecoming Dance on Saturday, october 6th.

The final event of the Pep Rally was the infamous Jump, Shake Your Booty Class Shout. What happens is something along the lines of Ms. Plitt yelling for each class to, “shake your booty,” and “jump, jump,” and varying degrees of participation from each class, with the newer generations of Arundel being more hesitant.

At about 2:15 p.m., students were dismissed from the field and walked to their busses, cars, or other modes of transportation to go home and prepare for the Homecoming Football Game against North County at 6:30 p.m. that night.