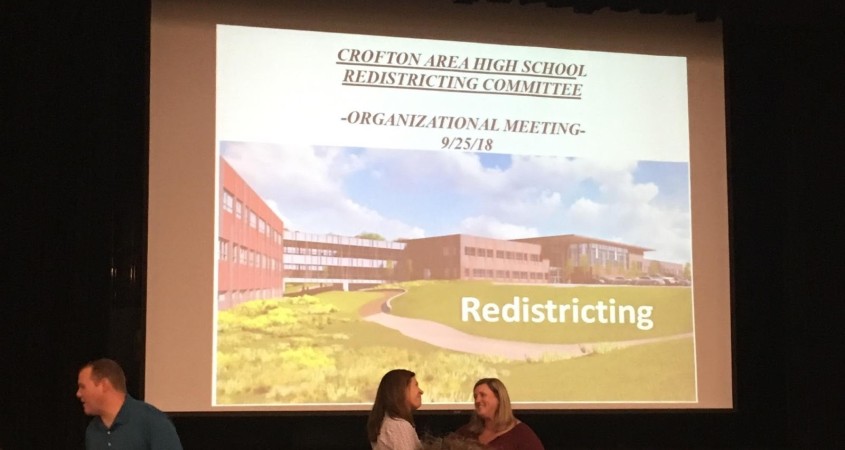 On Tuesday, September 25th, the first of six meetings concerning redistricting for the new Crofton Area High School was held from 7 p.m. to 9 p.m. in the Arundel High auditorium. It was an organizational meeting, a time for attendees to ask questions about the redistricting process, and the Chairman and Recording Secretary of the committee were chosen.

The basic process for redistricting is that the first meeting on September 25th is for organization. All meetings after that will be “working” meetings, at which time the committee actually starts to draw the lines. After about six weeks, the committee will send their proposal–or proposals–to the Superintendent of Anne Arundel County Public Schools, Dr. Arlotto, in November. Arlotto will then present the proposal to the board in December, who will make the final decision on how to redistrict based on the committee’s proposal. The final plan will be adopted in April after public hearings.

The meeting was led by Scott Schuler, the Anne Arundel County Public Schools Student Demographics and Planning Specialist. He introduced the committee and acted as a moderator for the meeting. Schuller reminded attendees several times that the September 25th meeting was the only meeting he would be leading, and that the committee would take over for all subsequent meetings.

The committee itself is made up of eighteen people, with two representatives per potentially affected school. The schools in question are Arundel High, South River High, Arundel Middle, Crofton Middle, Crofton Elementary, Crofton Woods Elementary, Crofton Meadows Elementary, Nantucket Elementary, and Piney Orchard Elementary. However, “The fact that a school is represented on the committee does not necessarily mean that the school’s attendance area or feeder pattern will change,” according to the Anne Arundel County Public Schools website, where all of the information on redistricting can be found.

At the end of the meeting, the committee clustered together and elected Jonathan Boniface as the Chairperson and Sarah Ross as the Recording Secretary. This decision was made within the committee and was not open to public attendees.

The official task of the committee is to define the boundary for the Crofton Area High School–a separate committee decides the official school name, colors, and mascot. Basically, this is the group of people that draws lines on a map and decide who goes where. However, the committee cannot base attendance at one school over another on test scores or things of that nature. Attendance is mostly based on proximity and the number of walkers and bus riders. But, it is possible for a student to be slated to go to a school that is not geographically the closest to him or her. This is due to capacities of the individual schools, bus routes, walking routes, etc.

Currently, the school has a projected capacity of 1,696 students. This was a matter of interest to many attendees. Several clarifying questions were asked regarding this figure, such as whether it was based on the current population, the projected population for the date the school opens, and even the projected population in ten years. Schuler stated that the county uses a ten-year projection for redistricting to prevent the need to redistrict every few years.

Another question regarding the proposed capacity was whether the number of private school students that could possibly switch to public school was being considered. Schuler replied that the county knows how many students attend private schools, but not exactly where they live. This makes redistricting more difficult, but the county does try to plan for it.

The third question regarding capacity was if new housing communities were factored in. Schuler stated that the county meets with developers to find the statistics on when new communities will be built and the demographics (families compared to 55 plus). An attendee commented that the demographics of new neighborhoods can change last minute, and Schuler specifically cited Two Rivers and Wilson’s Grove as examples. One attendee stated that Schuler’s comment seemed targeted at Two Rivers, which the attendee claimed was two thirds 55 plus. Schuler replied that his statement was neutral, but the exchange opened the way for more declarations of dissent regarding school capacity. With all the concern for overcrowding, Schuler assured attendees that the county, “will accommodate whoever shows up at the school and is entitled to be there.”

Other topics discussed included how redistricting was done for Severna Park High School, to which Schuler explained that Severna Park was a re-build, not a brand new school, so redistricting was not necessary. In fact, the most recent new-build school was Broadneck High School, which opened 32 years ago. The last school to be redistricted was Annapolis High School, but the committee devised so many possibilities for redistricting that the board decided not to make any changes at all. The same goes for this committee; they can make as many proposals as they want, but the board can change their proposal or not accept them at all. When asked how much the board typically changes a proposal, Schuler replied that it is at least recognizable when the board is done with it.

Another concern was whether students would be kept together through elementary, middle, and high school as a continuous feeder system. Schuler stated that was the hopeful end result, but nothing is certain. However, students will be phased into Crofton High School. The plan is that the first year it opens (2020), only freshmen and sophomores will attend; juniors and seniors will remain at their original High School. Then, the next year (2021) a new freshmen class will attend, with the freshman and sophomore class of the previous year becoming sophomores and juniors. The cycle will continue into the next year (2022) and all subsequent years so there will be a freshmen, sophomore, junior, and senior class at the Crofton Area High  School simultaneously.

All other meetings taking place over the next five weeks will be held on Tuesdays from 7 p.m. to 9 p.m. in the Arundel High auditorium. Already scheduled meetings can be canceled if they are unnecessary, and additional meetings can be scheduled. The official schedule can be found on the AACPS website aacps.org.