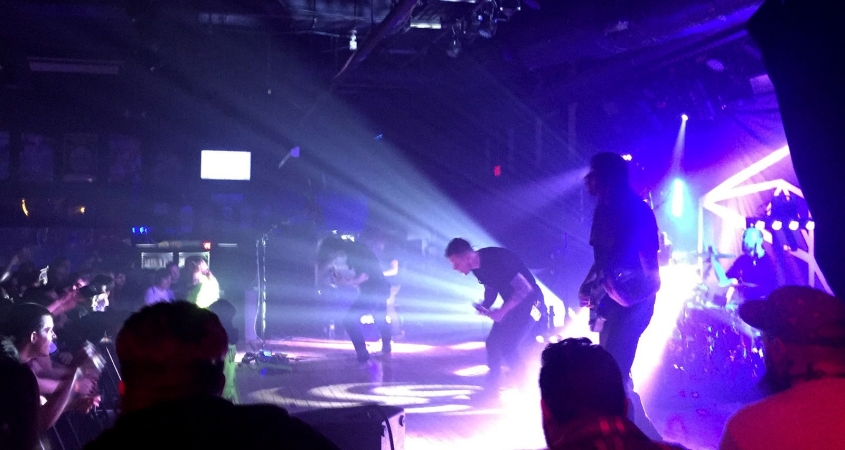 This concert has been long anticipated.

Prior to the concert, I had already listened to Tesseract’s entire discography to write reviews of their career and their new album, “Sonder,” which this tour is supporting, so I was more than ready. I had already seen them live three times before and loved them. The first time was in support of their previous album ‘Polaris,’ and the next two were in support of other bands, Megadeth and then Gojira. I was very excited to see my heroes live again, and to experience new music with Astronoid and Plini.

Right as 7 p.m. struck, progressive metal band Astronoid took to the stage. What immediately hit me was the rumbling bass and atmospheric vibe. It’s clear why they would tour with Tesseract, as those two things heavily characterize both bands’ sounds, along with smooth, soaring vocals. Besides that one similarity, Astronoid had a very unique sound. They had a deep extreme metal sound, similar to bands like Testament and Overkill.

However, everything they played sounded happy. In music, songs are written around scale, which is a grouping of notes that sound good together. Building further on that, most scales are either major or minor. Most metal is written using minor scales, for their inherit dark and brooding tonality. Astronoid completely flipped that on its head by writing extreme, brutal music in a major key, which has an uplifting, jovial tone (check out Sean Daniel on Youtube for a better explanation). I’ve literally never heard another band like that. Although I was very pleasantly surprised by this, it led to each song having the exact same feeling. Happiness is good is music, but there is far more emotional depth and intrigue in music in minor. Overall, my thoughts are: if they came on the radio, I would certainly crank it, but I wouldn’t buy tickets to a show that they were headlining.

Then at nearly 8 p.m., Plini took to the stage. I was completely entranced by his music. Plini is a solo guitarist from Sydney, Australia. His sound is very indicative of groups like Polyphia, Chon, and Animals As Leaders, with a certain phrasing style of guitar god Guthrie Govan. He played the guitar over a very metal and jazz-influenced backing band. In my opinion, it was the perfect blend of jazz, metal, and prog. Being so heavily jazz-influenced, there was a lot of improv soloing, very Grateful Dead-esque.

About midway through the set, Plini said, “this next tune is a lighter, jazzier one.” And then the bassist started snapping and walked a bassline over a jazz drum groove. After 20 seconds of jazz, they stopped and the entire venue erupted in cheering and laughter. Not only was he a master of music, but a master of comedy, too. Overall, he was virtuosic, comedic, and artistic; I was blown away. Towards the end of the set, he said that this was his first time playing in Baltimore, and after seeing him play, I will for sure be at his next show in town. I plan to buy his music and do a deep-dive into his discography as soon as possible.

After two hours of waiting, the main event happened. Tesseract took the stage at 9:10 p.m. and commanded a control over the crowd like no other band. They opened up with “Luminary,” the lead single and first track from new release “Sonder.” The sound was just as clean and clear as the album recording, but it was far more intense and interesting. I could literally feel the rumble from the bass shaking my body. Barefoot bassist, Amos Williams, had a very strong and dynamic stage presence, and had us all shook, no pun intended.

Adding to this strong stage presence across the entire band, they were all clad in black clothing. With a spinning, multi-coloured light show, the contrast made them look menacing and I loved it. It created a celestial, outerspace sort of atmosphere, and made me feel like I was adrift, floating across the night sky. Even the drummer got in on this, having a clear acrylic drum set that was just as a part of the visuals as the lights were.

Not for a single moment did they lose any intensity. Drummer Jay Postones kept up his chops the entire time. He added a lot of extra to each song. Putting in more drum fills and cymbals hits really showed off his technical prowess and slick, fluid style that I have come to fall in love with. Powerhouse singer Dan Tompkins kept up the smooth, operatic vocals the entire time, not wavering for even a second. This kept the band working as a well-oiled machine, like clockwork. And with not very many words between songs, it was wall-to-wall entertainment from start to finish.

Even the rougher tracks from their earlier years, like “Deception,” “The Impossible,” “April,” and “Acceptance,” sounded more clear and cohesive than ever. They were certainly better than the recordings on ‘One.’ And on the song “Of Matter – Proxy,” Tompkins was able to hit high notes that he previously wasn’t when I’ve seen them in the past. This is because the singer who recorded that song, Ashe O’Hara, has a higher range, but Tompkins was able to expand his own. The boys have been practicing.

There were no technical difficulties whatsoever. They ended the set with usual closer, “Acceptance”–a heavy song, and a strong ender. During a small break in the song, Tompkins said, “Baltimore thank you so much. We will see you again.” So, if any of you guys are in town when they come around again, I very highly recommend you see them.

Overall, each time I see Tesseract, they get better and better. They played each song better and differently than I remember at previous shows. It truly shows their musical skill and merit. I will be buying VIP tickets the next time they come around in the area.

Side note: I also ordered a chicken quesadilla from the Soundstage kitchen. It was a very good and tasty quesadilla, and the waiter was very nice and friendly.