Arundel High School’s newest musical performance, “All Shook Up,” is set to debut this Friday, March 16.

The musical contrasts with the dark and dreary nature of last year’s “Les Misérables.” “All Shook Up” is filled with bright colors and “poppy arrangements,” as said by lead actor Johnny Greenslit, who plays Chad.

“All Shook Up” is about a small town with rules outlawing citizens from dancing, wearing tight jeans, or wearing funky colors. However, when a roustabout that just got out of jail arrives, he fixes up the town by making it fun and sharing his music.

The members of Arundel High Theater are working hard to put “All Shook Up“ together. Rehearsals run from 2:30 p.m. to 6 p.m. on Tuesdays and Thursdays, and from 5 p.m. to 9 p.m. on Mondays and Wednesdays. They started preparing the musical in January of this year, and are ready to share their work to the world this Friday.

Emily Matsui from the tech crew adds, “Arundel Theater is going up. We’ve definitely improved over the years.” 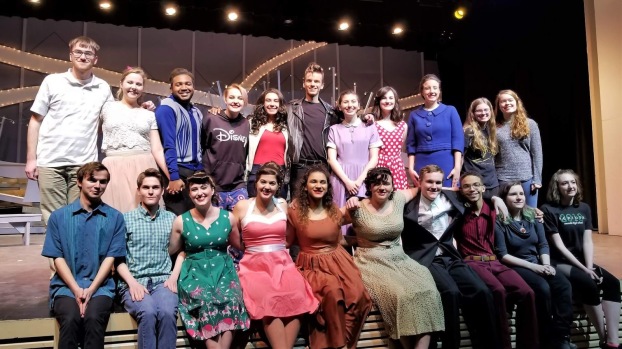 This will be Arundel High’s third musical directed by Mrs. Minor, the school’s theater teacher. She directed “Joseph and the Amazing Technicolor Dreamcoat” two years ago, and “Les Misérables” last year.

When asked why students should see the musical, Grace Smith from the ensemble explained that “Seeing everyone put all their hard work into something they like to do is kind of fun to watch.”