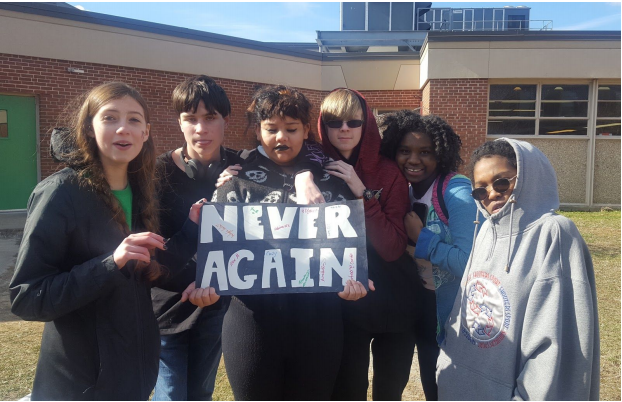 On Wednesday, March 14, exactly one month after the massacre of 17 students and instructors at Marjory Stoneman Douglas High School, Arundel High students gathered in the cafeteria courtyard at 10:00 a.m. to memorialize the lives lost in the shooting.

Throughout the nation, students protested on March 14 to encourage “congress to change gun laws,” but Arundel students “really wanted to focus on honoring the 17 victims,” Ms. Stawas, the Child Development and stand-in Signature teacher, said.

The Student Leadership class and the Wellness club organized the “walk-in”—students walked into the courtyard, not outside of the school. These students wore pins they made that had ribbons with the same colors as Marjory Stoneman Douglas’ school colors. Some also wore pins with the number 17 stamped into them, for the 17 victims. These pins were made by Ms. McCarthy in the Media Center.

At exactly 10:00 a.m., about 20 minutes into second period, students left class and walked to the cafeteria courtyard. Teachers stood in the hallway to monitor students as they walked, but did not try to stop students or tell them to go back to class.

People congregated around a group of students from the Student Leadership class and Wellness club, who held signs with the names of each of the people lost in the Marjory Stoneman Douglas shooting. Next to those students, a microphone was set up, and several students and teachers spoke.

“Inevitably, students came out just to come out, but as I looked across, I could see that a lot of student’s hearts were in the right place,” Ms. Stawas said.

Next, a few students recounted all of the school shootings that have occurred so far this year in the U.S.

After the students, Arundel teacher Mrs. Lange spoke. She implored students to realize “this is a time for unity. . . . We need to be connected.” She said that now is the time to support each other, to ensure that instances as the Marjory Stoneman Douglas shooting never happen again.

Her speech was followed by a round of applause and shouts of agreement from students.

The students holding the names of the victims then walked through the crowd, reminding everyone of why they were gathered.

Red and silver heart shaped balloons were also released into the sky, which elicited more cheers from students.

There were several people holding signs. One was encouraging students to join community circles to discuss their feelings towards the recent shooting and other violence. Another sign said “NEVER AGAIN.”

There were also students watching inside the school from windows, specifically in the E hall staircase.

A few of the students who had been holding the signs with the 17 names on them spoke at this point. They discussed the mental issues of the shooter and how bullying had a great influence in the Florida shooting.

One of these students, Janae Boyd, a senior in the Student Leadership class, stated afterward that she just wanted everyone to realize, “this could’ve been us.”

Another senior in the Student Leadership class, Journey Brown-Saintel, was pleased to see the unification of Arundel students in the crowd. She said that “Arundel has our problems, but we always come together.”

Then Ms. Stawas notified everyone that there was a community circle being held inside, near the cafeteria, for anyone who wanted to express their thoughts on the recent events.

One of these community circle gatherings will be held around April 18 in the stadium. Ms. Stawas explained that the purpose of these circles is to “give students a voice,” and to unify them. She said it is “an opportunity to talk.”

At 10:19 a.m., students were asked to return to class, and a student sang “Amazing Grace” as everyone walked inside.

Many students and teachers, along with Principal Davenport, partook in group hugs, and Mrs. Davenport could be seen wiping tears from her eyes.