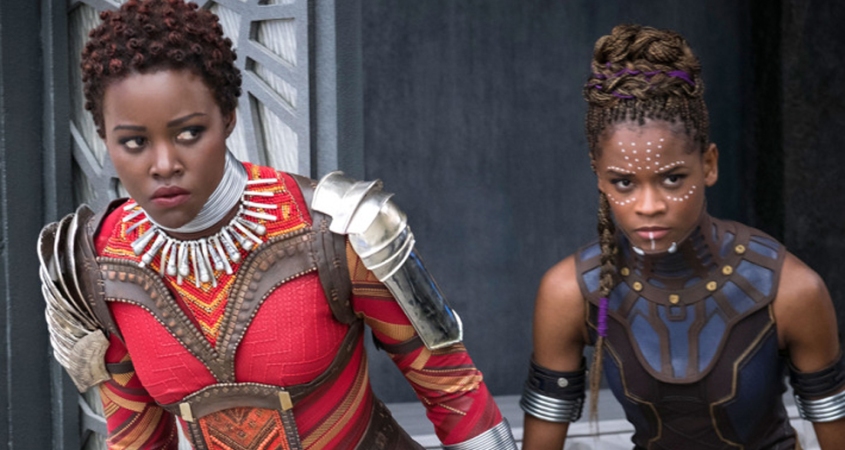 “Black Panther” is a cinematic masterpiece, combining incredible acting, beautiful costumes, and an amazing soundtrack with a brilliant plot and script to create a movie that jumped to #1 in the world soon after coming out. It’s no surprise that this happened, because the movie was highly anticipated. Also, it’s so incredible that some people have, or will, see it multiple times—myself included.

The film fit into the Marvel Cinematic Universe (MCU) perfectly, clearing up my prior questions. For starters, the question of how Wakanda maintained its façade as a third-world country was answered. The vibranium within the country allowed for technology that was not possible elsewhere, and that technology created some sort of energy shields concealing the country and disguising it as surrounded by thick jungle.

Another question I had was how the Wakandan delegation was treated as well as they were in “Captain America: Civil War.” Flashbacks showed that many people actually thought little of them. This was also shown in the first after credit scene, where King T’Challa (Chadwick Boseman) speaks to the UN again, this time offering aid to the rest of the world. Everyone except CIA agent Everett Ross (Martin Freeman) scoffs because they all believe Wakanda has little or nothing to offer. Ross, however, had been in Wakanda and interacted with the technology there, and he knew what the country could do.

Many aspects of Wakandan culture and clothing were taken from existing African cultures. For example, the blanket cloaks worn by the Wakandan army led by W’Kabi (Daniel Kaluuya) were inspired by the Basotho blankets from the country of Lesotho. Also, the gold and silver rings around the necks of Okoye (Danai Gurira) and the other members of the Dora Milaje are similar to the indzila worn by women of the Ndebele tribe in South Africa.

Further inspiration for the Dora Milaje was drawn from the Maasai warriors of Kenya and the Dahomey Amazons from western Africa. Another costume inspired by existing cultures was that of Queen Mother Ramonda (Angela Bassett). Her headdress was designed to look like the isicolo hat worn by Zulu women. Yet another aspect of African culture in “Black Panther” was Xhosa, a language spoken by over 8 million people in South Africa, as well as Zimbabwe and Lesotho. This language was spoken by many Wakandans in the movie.

As much as I loved the story told by the movie, I loved the characters more. T’Challa, of course, is a great protagonist and the audience roots for him. The villain, Killmonger (Michael B. Jordan), is considered to be “right” by many in the sense that he wanted Wakanda to arm black people, so they could rise up against white people, as well as anyone else who wanted them to be lesser or who thought that killing everyone was wrong. And sure, if you think genocide is okay, then he’s totally right! If only there were someone who thought Wakanda should help others without harming them. Oh, wait, Nakia (Lupita Nyong’o) exists. Early in the movie, she insisted that Wakanda could, and should, help so many different countries in Africa and around the world. She explained that Wakanda could give foreign aid better than other countries could. The movie ended with T’Challa doing as she had originally advised, setting up a Wakandan International Outreach Center in Oakland, California as a start for integrating Wakanda with the rest of the world.

Another amazing character is Okoye, the general of the Dora Milaje. She is loyal to Wakanda and the throne first, and T’Challa second, and this is what makes her so interesting. When Killmonger assumed the throne, she stayed in Wakanda to help him, leaving Nakia to do the right thing on her own. When she discovered T’Challa was alive, however, she changed sides to be loyal to him, as the challenge was not yet complete (as neither Killmonger nor T’Challa had surrendered or been killed yet) and therefore T’Challa was still the king. Still, she and T’Challa would have lost the battle had it not been for M’Baku (Winston Duke) and the Jabari people who came to fight for Wakanda.

These characters were all incredible, but my favorite character by far was Shuri (Letitia Wright), T’Challa’s teen sister. I almost don’t have the words to describe how perfect she is. She’s only 16 and already the smartest person in the world! And it would have been so easy to make her whole character depend on her being smart, and have her be boring or stuck-up about it, but she’s not. She acts like a normal teen (other than the saving the world part). She teases her brother constantly, references memes, and is basically a relaxed and fun person. She is also incredibly kind and loves to help people, as shown when she agreed to spearhead the Wakandan International Outreach Science and Information branches, healed Agent Ross’s bullet wound, and fixed Bucky (Sebastian Stan). I am truly excited to see her in future movies, and to see all the amazing things her character does.

Another thing I enjoyed in the movie was the soundtrack. It fits the movie and the scenes perfectly, and both Kendrick Lamar and Ludwig Göransson did an amazing job, and I liked it so much that I bought it on iTunes. It tells a story on its own and each song contributes to the overall mood of the movie, just as any soundtrack should.

Overall, I would rate “Black Panther” a 9.5 out of 10. In my opinion, it is the best movie in the MCU, closely trailed by “Thor: Ragnarok,” which came out in late 2017. It seems that the Marvel movies have been getting better over the years, and I hope that this trend will continue. I am looking forward to “Avengers: Infinity War,” which has a large cast of many past superheroes, including T’Challa, Okoye, Shuri, M’Baku, and Ramonda from “Black Panther.”