At 6 years old, Chuck Markiewicz had his whole future planned out.

During his time at Odenton Elementary School, the puzzle pieces for what would later become a decades-long career started to fall into place. His grade school achievements didn’t take place in the classroom—Markiewicz, 62, noted that he wasn’t a great student—but in the gymnasium. In his physical education class at Odenton, Markiewicz broke the school’s burpee record.

That’s when he found his calling.

In 2001, Markiewicz fulfilled his childhood dream of head coaching football at his alma mater. 17 years later, his dream is winding down to a close. Last month, Markiewicz, the winningest coach in Anne Arundel County history, announced his retirement from coaching the Wildcats.

Arundel Principal Gina Davenport and Athletic Director Kevin Necessary were one of the first to be informed of his decision, along with Markiewicz’s football players.

Markiewicz’s retirement was not a complete surprise to Necessary. He says he had an idea that the day was coming, but he counted his blessings each year that Markiewicz remained on Arundel’s staff.

“I was happy that he was able to end this thing the right way on his own terms,” he said.

Before becoming the athletic director, Necessary was on Markiewicz’s staff as wide receivers coach from 2002-2014. “I have a good handle on what successful coaching looks like, and a lot of that comes from working under Coach Mark.”

Arundel’s athletic department contains 23 varsity programs, but Markiewicz saw this as more than just 23 teams. He viewed it as the Arundel Athletic Department. Necessary notes that this mindset was evident at school workouts; the coach wanted every athlete, no matter the team, to transcend the boundaries of their respective teams and workout together and support each other.

According to Necessary, the first day of football every year was always something he looked forward to. This was all thanks to how Markiewicz approached the day and made it special for the players.

“I think people underestimate, for the kids involved in not just high school sports but in all aspects of high school activities, the impact that activity is having on their lives at that moment, and the memories that they’re creating,” Necessary said.

Going on 40 years old, Necessary said that he still talks about the memorable moments from football games that occurred during his high school football career.

The news broke to Davenport when Necessary asked for a meeting with her. He then walked into her office—along with Markiewicz. Davenport held concerns for the sudden gathering; it was the off-season for football, she said, and she typically doesn’t see Markiewicz in January.

It was an emotional meeting—and an emotional decision—for both Markiewicz and Davenport. Davenport has known Markiewicz for a while; he was her husband’s football coach at Chesapeake High School. “I think of him as a friend as well as a colleague,” she said.

Davenport explained that Markiewicz always had a “real presence” at Arundel. If he came into the cafeteria and approached a group of students, they would immediately do anything that he asked, whether it meant cleaning the table or taking a seat.

She describes Markiewicz’s career as “a great story about a kid from a community who grew up and gave back to that community.”

One of Davenport’s fondest memories with the former coach is when Markiewicz, a man who made a career out of giving athletic opportunities to kids, helped give the same opportunities to the Special Olympics. 10 years ago, Arundel held their first Polar Bear Plunge. The principal at the time, Sharon Stratton, along with Davenport, who was then the assistant principal, agreed to plunge into the Chesapeake Bay  if students raised enough money for the Special Olympics.

When this goal was achieved, Davenport knew that they had to raise the stakes for the following year. With the knowledge of Markiewicz’s strong reputation in the Arundel community, Davenport approached him to set a new goal. Markiewicz agreed to run into the bay 24 times in 24 hours if the students raised $50,000.

“The day of the event, we were about $2,000 short,” said Davenport. But the next morning, their goal was reached, and Markiewicz kept up his end of the deal. “He didn’t once complain about the temperature of the water. He talked about how [the students] made him feel like a celebrity.”

As a student at Arundel High School, Markiewicz participated in the school’s football, wrestling, and baseball programs. Upon graduating in 1973, he went on to continue football and lacrosse at both Anne Arundel Community College and Salisbury University.

Markiewicz’s athletic career has been defined by not only his skill, but by the coaches who inspired him. He cites his inspirations from Harry Sinclair, his Arundel Touchdown Club youth football coach, to Jerry Mears, his Arundel High football coach. “The list is endless,” he said. 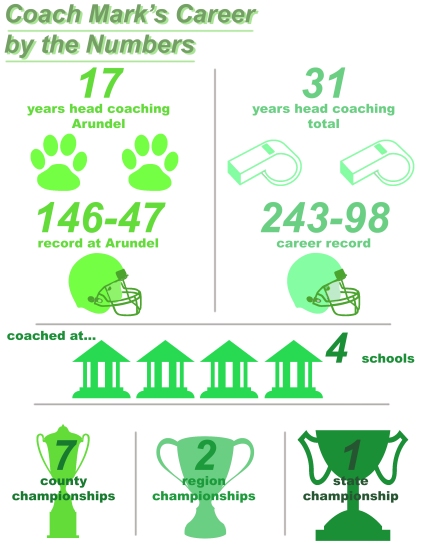 For Markiewicz, the most prominent memories from his coaching career are a combination of wins and losses.

He remembers when during a game he coached at Chesapeake, he neglected calling a time-out when the player that they wanted in the game didn’t have a helmet. “We probably would’ve won the game if we called a time-out,” Markiewicz said.

He also remembers winning the state championships when he coached at North County High School, a moment that Markiewicz regards as very special.

Before departing from Arundel, Markiewicz wanted to leave the school’s football program in a good place. “I wanted to be back in the playoffs,” he said. “I wanted to make sure there were people who were qualified in the building to take my spot.”

During his time at Arundel, Markiewicz has tried to instill in his players that there’s more to life than football, and that’s “being a good person.”

Reginald Best, the defensive end/tackle for the Wildcats, can attest to this. “He’s impacted so many people, and I couldn’t be prouder to be one of the people to enjoy being on his team,” Best said.

The first time that he came face-to-face with Markiewicz was during his freshmen year junior varsity football tryouts. From his first impression, Markiewicz seemed intimidating; Best recalled that he “chewed out” a few kids for being late and not wearing the right attire.

Once he moved up to varsity football and learned more about Markiewicz, Best began to see past his tough exterior. He now regards Markiewicz as one of the most influential people in his life.

“He’ll dance in the locker room with us after big games,” he said. “He cares about us and our well-being.”

Kyle Kidwell, the wide receiver for the Wildcats, shares the same respect for Markiewicz. “I’ve been coached by the best coach in Maryland,” he said.

While Markiewicz is retiring from Arundel, he’s not retiring from football. He’s been hired as the offensive line coach under Kyle Schmitt at Archbishop Spalding High School.

Schmitt became close with Markiewicz in 2013 once he moved from Atholton High School to Spalding. Even at Atholton, Schmitt knew Markiewicz’s name as synonymous with Maryland high school football. “What you see is what you get with him, which is, I think, the coolest thing,” he said.  “He is who he is, and he loves coaching football.”

Markiewicz brought Schmitt onto his staff of the Maryland team at last year’s Big 33 Football Classic.

“His character is through the roof, I don’t think I could give a higher character rating,” Schmitt said. “We’re thrilled to have him with us.”

In December of last year, Schmitt reached out to Markiewicz and asked him if he knew anyone who could fill their offensive line coaching position. Schmitt recalled Markiewicz saying, “If you’re interested in having an old guy, I’ve got some decisions to make.”

Schmitt said that after that, he stopped searching. “I was really fortunate that I sent that text to Chuck.”

Markiewicz’s brother asked him why he would walk away from his dream job. His answer was simple: “Sometimes, you love something so much you got to leave it while you still love it.”