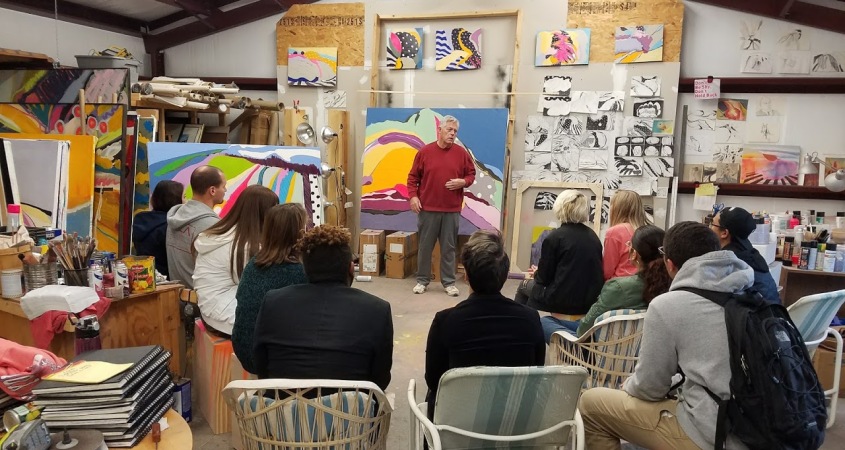 John Bodkin’s studio is located only a few miles down the road from Arundel, so the students opted for self-transportation instead of renting a bus.

The students took a tour of Bodkin’s house, since he has work in his house and his studio in the backyard, and then they “went into his studio and he presented his work and his career, and gave an opportunity for questions,” explained Rolfsness. She said that the tour and presentation gave students “a realistic point of view of art as a career and inspiration.”

Rolfnsness went on to say that the trip is important because it “directly relates to the possible careers students will have in the future,” which is why it is annual. She also explained that John Bodkin’s studio is the only studio they visit, but as more artists become willing to share their experiences, she would like to visit their studios as well.

Zuko Rasmeni, an AP 2D art student who went on the trip, explained that his favorite part was listening to Bodkin’s stories about the famous artists he has met and the places he has his art displayed.

Even though the trip did not increase Rasmeni’s interest in pursuing an art career, since he is interested in fashion and Bodkin creates mostly abstract paintings, Rasmeni believes it was important because everyone should “get a chance to meet someone in the field that they’re pursuing.” “You never know what it’s like until you meet someone who is actually doing it,” Rasmeni said.

One of the honors 3 2D art students, Jax Huntington, said that he enjoyed listening to Bodkin explain how much effort and time he puts into his art.

He said field trips like this are important because they show students that they can become successful through art. This is particularly relevant to Huntington since he is currently considering a career in art, specifically photography and painting murals.

Another AP 2D art student, Marin Dolbeck, went on this trip last year as an honors 3 student and enjoyed it so much that she decided to go again. Dolbeck explained that her favorite part was seeing John Bodkin’s older work and how his style has progressed over time.

While she does not want to pursue a career in art—she plans to be a sign language interpreter—she did enjoy the trip and might minor in art. Dolbeck believes this trip was important for the same reason Huntington does: “It’s really important to see actual artists doing what they love and being successful at it, and seeing that you can actually have a career in art.”