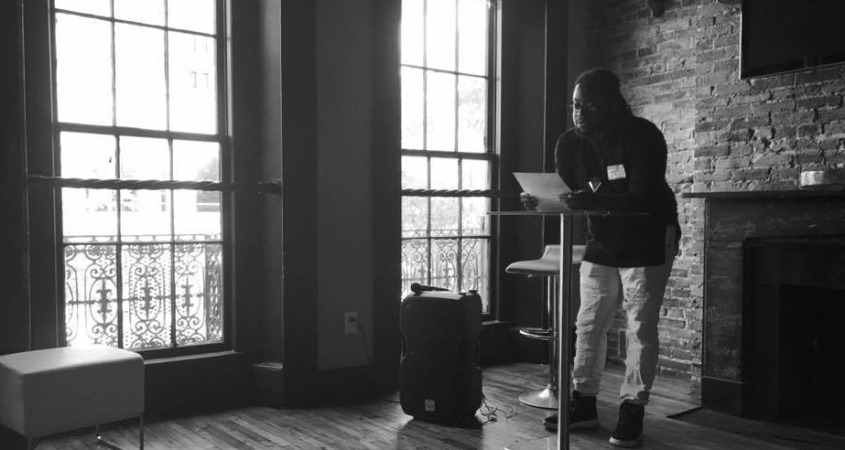 “Dear 16 year old me,” Alyssa Fenix began as she took center stage to the room of LGBTQ adults and youth in attendance last Sunday.

“I am pleased to inform you, that you, Alyssa, do get through it.”

A lesbian, a woman of color, a person with a learning disability and a history of anxiety and depression–all intertwine to make up Fenix. In her letter to her past self, Fenix reflected on her journey with these identities and the lessons she’s learned along the way.

The audience, possessing varying characteristics and backgrounds–queer women of color, transgender men, bisexual and lesbian women–surrounded Fenix on cushioned chairs inside The Attic at FLAVOR, the queer safe space of the Baltimore Bistro. They wore name tags adorned with their name and preferred pronouns. Some had their eyes fixated on Fenix, others had them cast down to their phones, editing and adding to their letters they planned on reading after her.

All had gathered for the “If I Knew Then” Project debut letter reading, a project, curated by the figure before them, with the goal of connecting LGBTQ youth and adults through the shared experiences in letters from adults to their teenage selves.

After Fenix’s reading, the event proceeded in the same fashion. Adults took turns reading letters they had written to their past selves as a part of Fenix’s project. With each letter reading, words of self-acceptance, self-love, and self-discovery culminated in the air.

One teenager in attendance, Sam Hendershot, read a letter in the place of an adult absent from the evening.

“It was really nice to read somebody else’s perspective,” Hendershot said after his reading.

Hendershot is a senior at Arundel High School, as well as the president of the Gender Sexuality Alliance (GSA), a club at Arundel. Fenix had previously been an advisor to the club during her time as a former teacher at the high school.

Coincidentally, the project was first started in 2013 after being inspired by one of her GSA students.

“One of my former coworkers, her daughter was in our GSA,” said Fenix. “She tagged me in [a Facebook comment], and just said, ‘You should really check out what so-and-so said in response to this,’ and it was something about the Bible and arguing that LGBT stuff was not valid. This individual went on there and was just very diplomatic and very clear about refuting it in a non-offensive way.”

“I was kind of like, huh, if those same communication skills existed and I had that drive and that passion, the combination of that could be really powerful, and so that’s why I started thinking about ‘If I knew then.’”

The project’s original purpose was to serve as a means to better support her GSA students. She had asked the students to come up with questions they’d ask their future selves. “There was one that said, ‘Are you still alive?’” said Fenix.

Through her project, Fenix hopes that LGBTQ youth and adults can better understand the importance of the dialogue between them.

“I think a lot of times, there’s a lot of dismissal of, ‘Oh, the millennials,’ or, ‘Oh, that’s older,’ and there’s this divide of total different experiences, especially when it comes to the need for gay bars or the presence of internet sites,” said Fenix. “Those circumstances might be different, but I think the core of it, there’s a lot of themes that are completely timeless.”

Fenix noted that the greatest reactions she’s received to her project have been from adults.

“I’ve received feedback on how cathartic it was and how healing it was to reflect on their journey and think just how far they’ve come,” she said.

From starting the project four years ago, she’s noticed how the shift in the political climate has influenced letter submissions—especially in a time where the current president jokes with the vice president, reportedly saying in reference to the LGBTQ community, “He wants to hang them all!”

“It’s interesting; I do have a hard time with getting people to follow through with the letters, and I almost imagine that it’s harder now because people are not feeling as hopeful,” said Fenix.

She’d like to have a few more letter reading events, and has a goal of creating an anthology out of the letters she’s received. With future letter readings, Fenix wants to bridge more gaps, whether this be diversity or age.

“My goal is to try to create spaces that are more inviting, just different perspectives and voices.”

Fitting to the theme of the project, Fenix’s letter ends with one final reflection: “If I knew then, that things would all work out, I would have taken a deep breath and let go.”

For more information on the “If I Knew Then” Project, go to http://ifiknewthenproject.webs.com/

To view Fenix’s letter in full, go to If I Knew Then Project letter by Alyssa Fenix