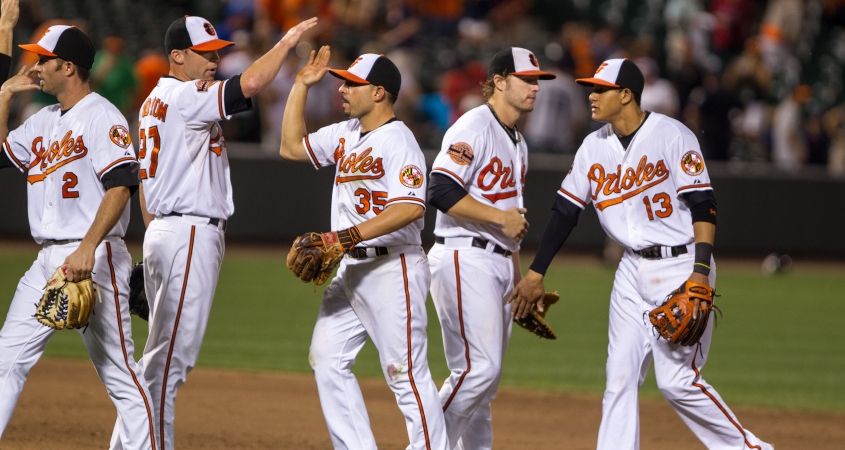 Baltimore– Despite only being 35 miles apart, the Baltimore Orioles and Washington Nationals only see each other for one sometimes two series a year and they generally play some great games and so far this year they have.

This year the four game set started off in Baltimore on Monday night where Orioles Starter Kevin Gausman pitched a gem and had arguably his best performance of the season with 7 innings pitched along with only giving up 5 scattered hits and 2 earned runs with O walks and 8 strikeouts. That 0 walks is important as Gausman has been prone to give up a lot of walks this year. In that same game catcher Caleb Joseph went 4-4 with an RBI which is his best performance of the year and the young phenom Trey Mancini hit yet another home run making that his 7th on the year.

Last night, it started too look like it was going to be a different story but however things did change late. Nationals pitcher Max Scherzer had a no-hitter going until Orioles RF Seth Smith changed that with a solo home run in the sixth inning. This tied the game up at 1.  Fast forward to the eighth inning where Washington Nationals first baseman Adam Lind hit a three run homer to give the Nats a 4-1 lead. However that lead would not last long as O’s Center Fielder Adam Jones hit a solo homer to make it 4-2 and then in the bottom of the ninth after a Chris Davis walk, First baseman Mark Trumbo hit a fielder’s choice to get himself on base and then Second Baseman Jonathan Schoop would score him on a double making it 4-3. Craig Gentry came in to pinch run for Schoop  which paid off as Shortstop JJ Hardy scored Gentry on a single that barely made it past the infield, it tied the game at 4-4 and sent the game to extra innings.

After 2 and half more innings the Orioles finally got things rolling in the bottom of the 12th where First Baseman Mark Trumbo scored the walk off Run after a flurry of singles earlier in that inning. Orioles win 5-4.

The series will now move to Washington DC as the Nats will host the O’s for two more games.

Update: The Orioles would go on a three game loosing streak after winning this series against the Nationals.