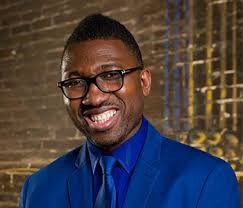 BALTIMORE- Born with extreme cataracts in his eyes,  Joshua Thomas was left with his mother, his piano, and his dignity at the age of seven.

Now 25 with over 55 awards in film and performing arts, his main priority and preference is to stay out of the limelight. He spends his time in classrooms helping troubled teens express themselves through the knowledge of performing arts and music. Polytechnic High School holds a reputation of being the best art school in the state of Maryland where actors, musicians, and visual artists have an outlet. Only two months into his employment, Josh has outdone all the teachers by personality, action, and message. Society perceives potential of a person by appearances or looks. Appearance begets deception, it distracts. People must learn to admire without sight.

When playing an instrument, being able to see is definitely helpful, right? For anyone who has fumbled about with a guitar, learned their first chord, their second, even a third and then given up when it came time to put all three together, imagine doing all that again, only without the help of the sense of sight. Joshua is also endearingly honest about the origins of his passion for making music: “I remember I was five years old, and I went to a restaurant with my family,” he said.

“There was a locked piano there and I really wanted to play, so the manager unlocked it. I played something and everyone applauded. That made me very happy.” Overcoming handicaps that seem unconquerable to us is part of every blind person’s life but, even so, there’s something especially winning about Josh’s  innocent cheerfulness. He could have sought doctors to get his sight back, but he hasn’t. Josh has willingly chosen to be the aid for young disabled kids, a move many would call selfless.

Rosaline Cauthren, good friend and employer of Josh, first intendedly assigned him storytelling to campers in the summer of 2014. Camp Centerstage is a two week opportunity to express yourself through stage performance. Really, it is meant to diversify our communities and promote inclusion. Not only did he teach, he exceeded expectations. “It was never easy for him, however he had a drive that I’ve always envied,” she said. “His obsessions with the well being of the children became his greatest asset . . . Even without his sight, he heard what people were missing out of their own lives.”