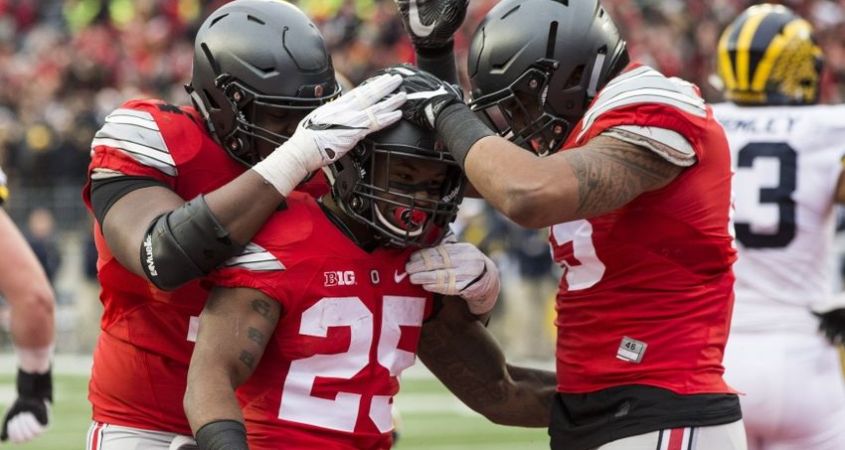 Ohio State and Michigan renewed their over 100 year rivalry on Saturday and it was arguably the game of the year. On the line: A chance to play for the Big Ten Championship, a possible shot at the College Football playoffs, and bragging rights.

This game featured an Ohio State comeback as at one point they trailed Michigan 17-7 and a lot of fans were questioning some of the calls that Ohio State made as at one point they attempted a fake punt that ultimately failed. They were also hurt by two missed field goals by Kicker Tyler Durbin. In the 4th quarter, they got their act together and came back and Durbin hit a tying field goal to send the game to overtime.

The Ohio State Buckeyes walking out on the field. Photo courtsey of landgrantholyland.com

In the Overtime, Ohio State scored first on a 7 yard run from QB J.T Barret to put them up by 7. Then Michigan got the ball and scored on a touchdown pass from Wilton Speight to Amara  Darboh. Michigan would kick a field goal on the next possession and go up 27-24.

Then Ohio State did the unthinkable. After converting a 4th down run that some people (including Jim Harbaugh who was later fined for his comments) say was incorrectly called, H- back Curtis Sammuel scored on 15 yard run to win the game for Ohio State. With NBA champion Lebron James in attendance the Buckeyes pulled off their biggest win of the season, one that likely solidifies them a top 4 seed and a College Football playoffs.